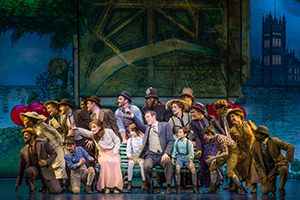 The tour of “Finding Neverland,” the musical that’s flown into Clowes Hall through Oct. 22, has a theatrically magical moment that occurs late in the second act. It’s a glorious, original effect that should have been the emotional climax of the show.

Instead, it was simply a beautiful special effect.

I’ll refrain from describing it even though the plot point it dramatizes isn’t really a surprise. Neither is anything else in this by-the-numbers telling of the story of J.M. Barrie and the creation of his best-known work, “Peter Pan.”

In this heavily fictionalized version, Barrie is on deadline for a new play and is short on inspiration. Enter a quartet of kids and their spunky widowed mother and, voila, the boy who wouldn’t grow up is born.

While individual songs (by Gary Barlow and Eliot Kennedy, best known from the UK band Take That), are pleasant enough, predictable rhymes and a tendency to have the same “imagination is wonderful” theme keep them grounded. They aren’t helped by choreography by “So You Think You Can Dance” vet Mia Michaels that never feels organic to the material.

The undercooked book by James Graham tries to tie it all together but only really sparks interest when, as was done more effectively in “Wicked,” elements that will eventually find their way into the finished story appear.  But the play begs for more dramatic action and higher stakes. To be sure, Barry’s life isn’t perfect: He’s got a society-centric wife who doesn’t understand his desire for playfulness and he’s got that pesky play to write. But it’s difficult to get emotionally involved when Barrie sings a song called “Stronger” when he never appears all that weak. And surrounding the playwright and his surrogate family with wildly exaggerated supporting players gets some cheap laughs but diminishes our investment in the outcome for those at the core.

The show is often beautiful to look at and the cast is uniformly solid, including children and dog. More time spent with the kids and less time being told to “Believe,” “Play,” and use “My Imagination” in the “Circus of Your Mind” “When Your Feet Don’t Touch the Ground” (all song titles) might have made “Finding Neverland” more worth the search.