For me, the weekend included catching up with shows at the Phoenix and the Indianapolis Museum of Art. It also involved stealing moments to read, flipping between David Wild’s goofy new “He Is…I Say: How I Learned to Stop Worrying and Love Neil Diamond” and Rick Wartzman’s “Obscene in the Extreme: The Burning and Banning of John Steinbeck’s ‘The Grapes of Wrath.'”

There was also sadness, hearing of the deaths of writers Studs Terkel and William Wharton.

Terkel, more than any other writer, gave me an appreciation of the struggles and triumphs of ordinary people–people I recognized from down the street and from across the dinner table. Through “Working” and “American Dreams: Lost and Found,” he not only introduced readers to scores of people who otherwise would not have had a voice, he also taught this writer the value of stepping back and allowing your subjects to be heard. He was the journalist as listener and I value the few seconds I spent in his presence as he autographed “My American Century” for me, a fan and admirer.  (He also co-hosted an outstanding, smart, fun TV interview show years ago with Calvin Trillin. Anyone remember it?)

William Wharton was more mysterious–and one of those writers I always felt I should read more from. I never did get around to “Birdy” or “Dad,” even though they were on my shelf for years, but I did get caught up in “A Midnight Clear.” It was one non-fiction book, though, that stayed with me. While working as a magazine editor in Philadelphia, one of my proudest acts was scoring an excerpt from Wharton’s bold and unforgettable “Ever After: A Father’s Story” and sharing it with readers who might otherwise not have encountered it. Telling about the death of his daughter and her family and the legal mess that followed, Wharton opened up his heart and soul in that book, humbly leaving other would-be revelatory writers far, far behind.

So have you read either of these writers? Any thoughts?

And, back to my original point, did you get out and do anything interesting on the A&E front this weekend? Did you ca 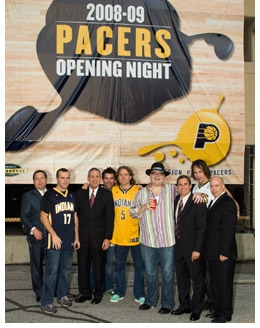 tch Gregory Hancock’s Dance Theatre’s “Oh My Goth!”, do the Necronomicon with the cast of “Evil Dead: The Musical,” partake in the Day of the Dead celebration at the Indianapolis Art Center, enjoy free pre-Pacer-game entertainment with Blues Traveller (right) or catch some spririting Spirit & Place Festival events?

What was on your weekend arts agenda?