Fishers is seeking proposals from Hoosier artists interested in an $8,000 gig creating a mural that will kick off a public art initiative in the suburban community.

A 360-square-foot mural is planned for the side of a brick commercial building at 8684 E. 116th Street, on Fishers’ main drag. The two-story east wall had been obscured by a nearby house that was demolished to make way for a pocket park. 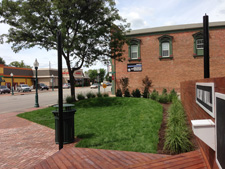 Town leaders are working to redevelop the downtown area. Construction is expected to begin next month on the signature project: a $35 million mixed-use development slated for the northwest corner of 116th Street and Municipal Drive.

Officials want to create a vibrant downtown that will attract residents and businesses alike. Public art is part of that vision.

Staff is working with the Fishers Arts Council and the Fishers Cultural Tourism Group to put together a community art master plan—a guidebook of sorts for defining, selecting and installing public art.

The downtown mural would be Exhibit A.

A request for proposals issued last month offers artists the chance to set the tone with a large-scale piece visible to the estimated 44,000 motorists who travel that stretch of 116th Street each day. (Not to mention the hordes that line up daily for ice cream at nearby Handel’s.)

The town is asking for a mural that creates “excitement and interest for the community.”  It has an $8,000 budget for the project.

Bids are due at noon Aug. 29, and a selection committee is expected to choose an artist by mid-September. Installation should be complete by Oct. 25.

What’s your take on Fishers’ push for public art? Does it really make a difference in a community?