His work-in-progress restaurant dubbed The Ville, expected to open in June at 101 N. 10th St., will offer American comfort food as well as a variety of healthy options. Brooks envisions a family-friendly, full-service eatery.

Brooks will handle culinary duties while his wife, Raquel Washington, manages the business. 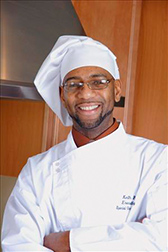 Born and raised in Gary, the 44-year-old Brooks earned a culinary arts degree from Kendall College in Evanston, Ill., and then went to work for Emeril Lagasse at New Orleans’ famed Commander’s Palace restaurant. His other experience ranges from a stint at in the kitchen at Red Lobster to a job managing café accounts for Indianapolis-based Crystal Catering.

Since 2005, he has operated—and served as executive chef for—Noblesville-based Special Occasions Catering.

“I have aspired to be a chef since the age of 14,” Brooks told IBJ, and learned the ropes by working for other culinary entrepreneurs.

In other area retail news:

— Upscale women’s resale shop Clothes Mentor is planning a grand-opening celebration for its Fishers location on March 11. The store at 11670 Commercial Drive sells gently used brand-name clothing, shoes and accessories; it will be the third Clothes Mentor outlet in Indiana. Owners Mark and Kathy Canada also own a Plato’s Closet children’s resale store on Indianapolis’ east side.

— With its central Indiana debut about a month away, growing Tex-Mex chain Chuy’s is looking to hire about 140 team members for its location at Hamilton Town Center in Noblesville. Chuy’s is known for its eclectic décor, so local owner/operator Russell Burns is planning some hometown touches, including a “dog wall” featuring pictures of customers’ canines. The restaurant is slated to open April 8 at 14150 Town Center Blvd.

— The Combine Café is under construction at Reynolds Farm Equipment’s new headquarters at 1451 E. 276th St. in Atlanta (within sight of U.S. 31). The breakfast-and-lunch spot will be open to the public beginning in mid-March, according to a teaser on the local company’s Facebook page. No word yet on the menu, but one commenter suggested green eggs and ham—an homage to Reynolds’ “We know green” tagline (itself a reference to equipment-maker John Deere’s signature color).

— Blaze Pizza leased 2,400 square feet in Carmel at 12697 N. Pennsylvania St., near Meijer. The California-based chain, which opened a location on Indiana Avenue near IUPUI earlier this year, features a build-your-own pizza assembly line and quick-fire cooking process that delivers custom-made pies in two minutes or so. Chipotle Mexican Grill leased 2,240 square feet of space in the same retail strip.

— Local Italian eatery Mangia! closed its Carmel City Center location on March 1. The restaurant, which moved to the upscale mixed-use development from a nearby strip mall in 2011, had been in business for more than 16 years. (Hat tip to Current in Carmel, which reported the closure March 4.)