Home » Blogs » North of 96th - Lindsey Erdody » Byrd’s in hand: Westfield gets one applicant for restaurant space in soccer arena

As expected, only one company responded to the city of Westfield’s request for proposals for a restaurant and catering business to lease space in its new indoor soccer facility at Grand Park.

The city has been working with Jonathan Byrd’s for two years on an agreement to manage food services in the Grand Park Events Center, but recently determined for legal purposes that it needed to solicit offers from other companies. 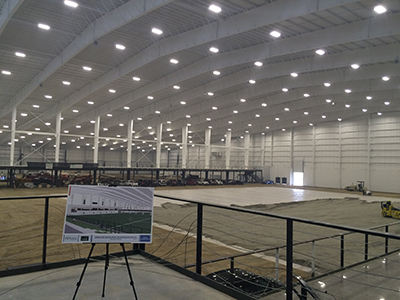 Westfield issued a formal request for proposals late last month with wording that all but ensured Jonathan Byrd’s would be the only company to meet the criteria. One former mayor previously told IBJ the process seemed “backwards.”

The deadline to submit a response was 5 p.m. Thursday, and the Board of Public Works and Safety briefly met at 5:15 p.m. to open the offers. The board voted to give city administration the authority to review the lone proposal from Jonathan Byrd’s and officially accept it, if they determine the company meets the criteria.

According to the request, interested businesses needed to show restaurant and catering experience of at least 35 years and “direct ownership or contractual business relationship” with the owner or operator of the proposed hotel that is expected to be constructed adjacent to the event center.

Byrd Enterprises meets both of those standards.

The request asked for a restaurant and catering business to lease a total of 18,270 square feet in the nearly 400,000-square-foot soccer arena, which will open at the end of the month. (See accompanying image for an interior view of construction.)

Since Westfield Mayor Andy Cook announced plans for the indoor facility in June 2014, the city has always maintained that Jonathan Byrd’s would serve food in a cafeteria-style restaurant on the first floor, along with a second floor lounge that overlooks the fields.

Under an agreement with private developer Holladay Properties, the city is leasing the facility and subleasing to other tenants. In January 2015, the Westfield City Council approved a sub-lease agreement with Byrd Enterprises Inc. for the space, but city officials say the lease has never been signed.

Burtron said after the meeting Thursday that there will be three separate leases for each of the spaces, and those could be formally signed as early as Friday.

He told IBJ last month that the RFP process was “a procedural matter,” and that the city would have to at least consider other offers if any were received, but it wouldn’t necessarily have to accept.

The Grand Park Events Center is scheduled to open July 21.