An apartment project that could include more than 200 units has been proposed in Carmel’s Midtown development.

Named Midtown Flats, the complex would include 206 apartments, a courtyard, pool, coffee shop and fitness center. More than 300 parking spaces would be provided through underground parking and an adjacent garage.

Midtown West is located on the west side of the Monon Trail and could include multi-family housing and office space. It is expected to cost $60 million. 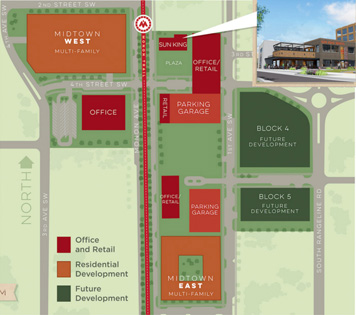 Construction started earlier this year in Midtown East, with the 140,000-square-foot Allied Solutions headquarters and 580-space parking garage recently breaking ground. Both are expected to be complete by October 2017.

In September, Indianapolis-based Sun King Brewing Co. announced plans for a $5 million craft distillery and tap room in the development. The 15,000-square-foot facility would be between the Allied Solutions building and the Monon Trail, near where Third Street SW exists today.

Midtown Flats would be to the south of those buildings. It would be the first residential component within the development.