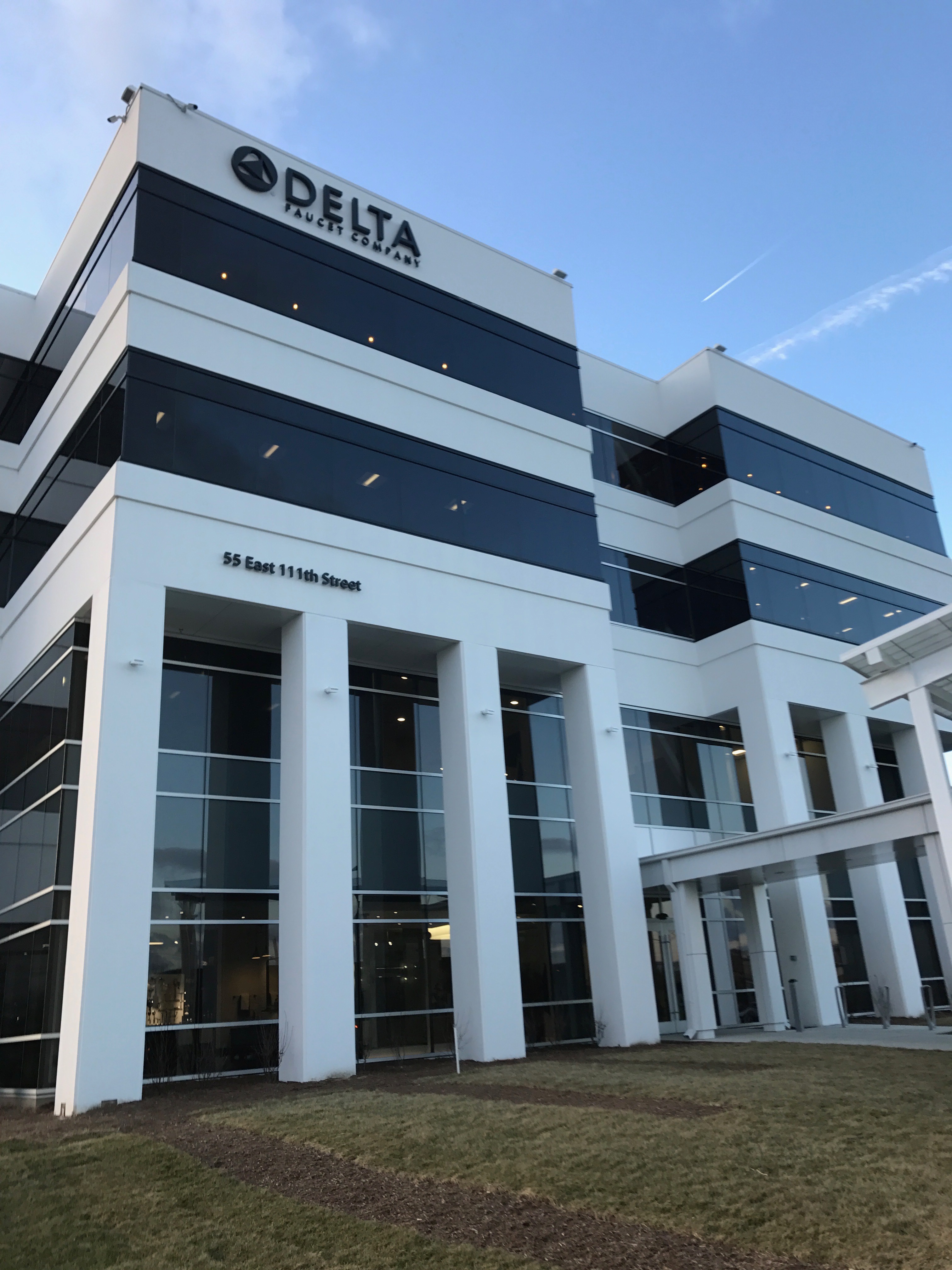 The four-story building includes an expanded showroom and cafe on the first floor, conference rooms on the second floor, and office space on the third and fourth levels. The basement of the building houses the kitchen and bathroom faucet manufacturer’s labs and testing areas.

The company had been outgrowing its building in 2014 when the expansion plan started being discussed and has been leasing office space at 12900 N. Meridian St. for 55 employees.

Construction on the project started in early 2015, and the building was finished in December.

“It’s honestly been a labor of love over the past couple years,” Jill Ehnes, vice president of human resources, said.

The lobby includes two displays honoring the company’s history and its founder Alex Manoogian, who invented the single-handle ball valve faucet in 1954.

The new building is named The Manoogian Center. Delta Faucet President Jai Shah announced Wednesday that Feb. 1 will always be known as Manoogian Day at the company.

“Today is a significant milestone as another chapter starts at Delta Faucet,” Shah said. 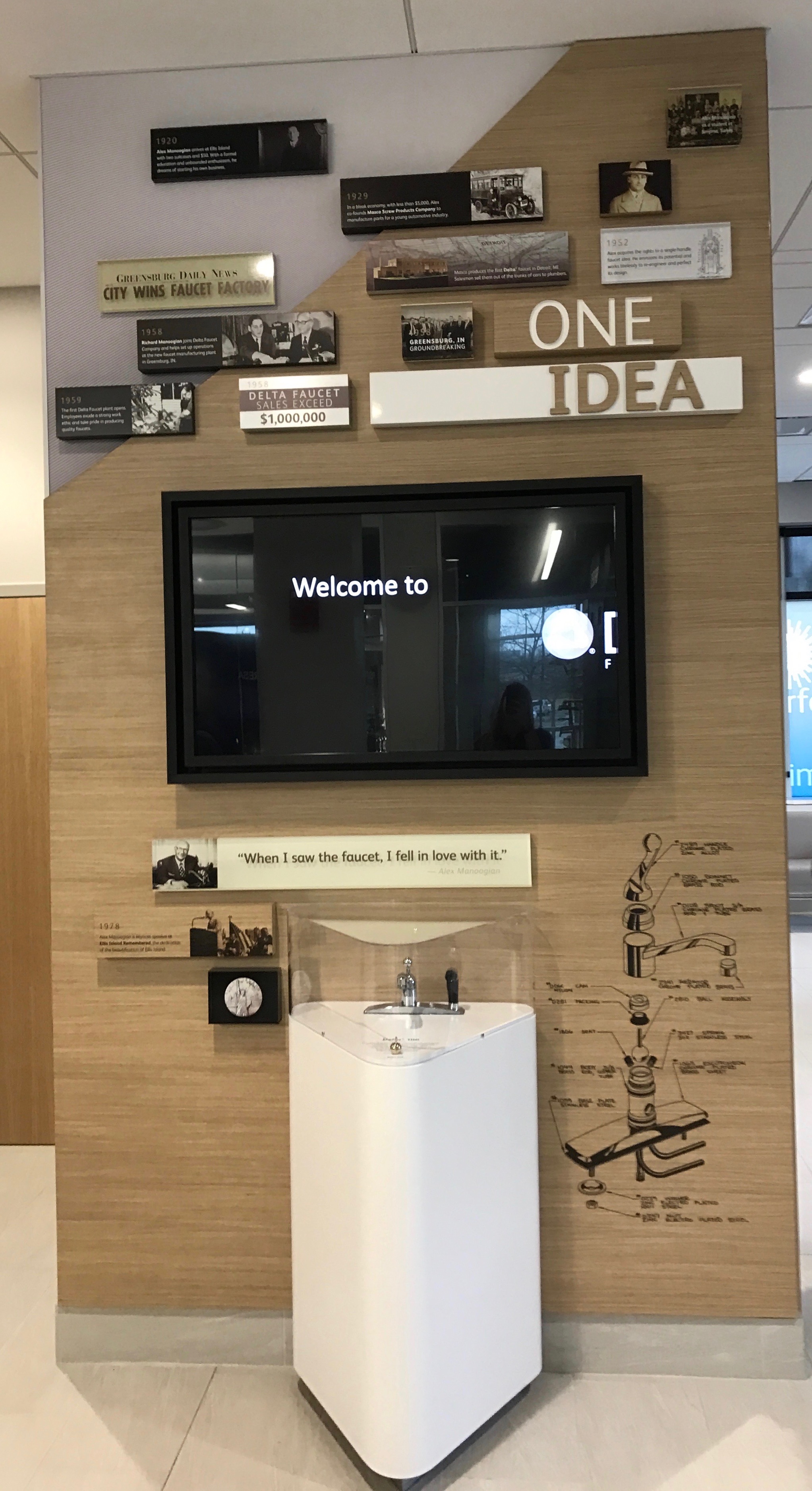 The first two floors of the headquarters are heavily geared toward welcoming the hundreds of customers that visit Delta Faucet annually. The showroom is about four times the size of the previous space, which had limited ability to display working products, Ehnes said.

“It pales in comparison,” Ehnes said. “It was really out of date.”

The new showroom features all three of the company’s brands—Brizo, Delta and Peerless—with working showers and faucets, and interactive media.

The former showroom is being renovated into conference space, smaller meeting rooms and a coffee bar.

In the basement of the addition, rooms with glass windows provide lab space for 3-D printing of prototypes, life-cycle testing of new products, durability testing of new baths, and showers and water-quality simulation.

Ehnes said the basement is about five times the size of the old lab space. 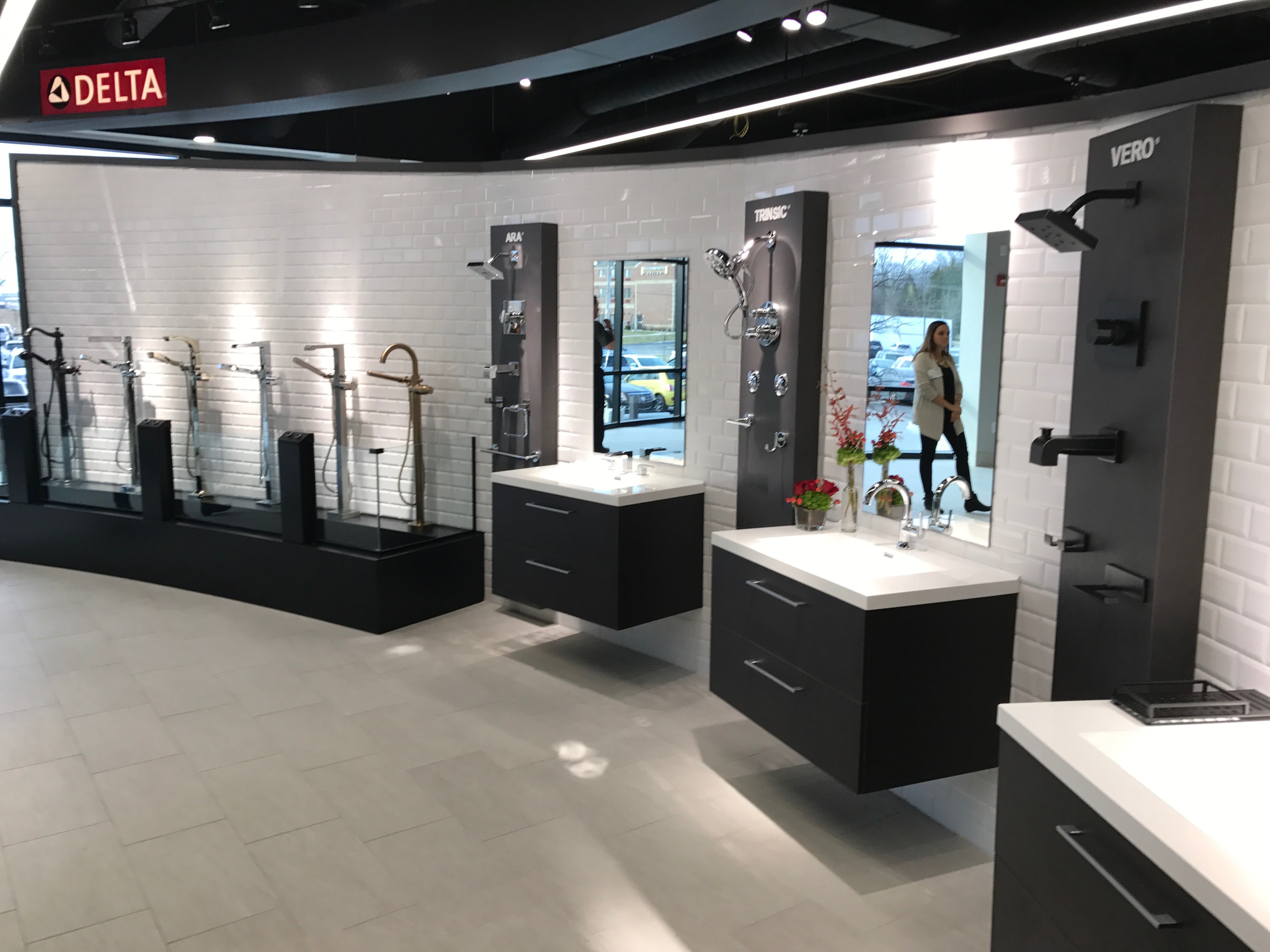 “When we launch new products, we go through a very rigorous test process,” Ehnes said. “We were running out of space in our old area to test, so this gives us some new space, which is great.”

A lab for testing packaging, which had not been handled in-house before, has also been added. The room includes machines that can drop, shake and compress packages so staff can see the impact shipping can have on the products.

The previous space used for labs and testing is being converted into a fitness area with locker rooms, weights, exercise machines, yoga space and a dedicated spinning room.

The common spaces in the old building will also eventually be renovated, according to Ehnes.

“It’s a gradual face-lift over time so [the old] building mimics the design of this one,” Ehnes said.