The Grand Park Events Center might have lost a food service provider recently, but other sports-related tenants are starting to fill the rest of the building. 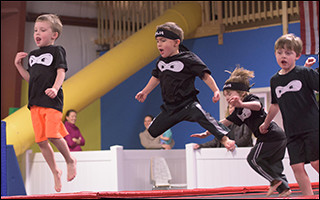 Jonathan Byrd’s confirmed earlier this week that it is no longer operating the two restaurants within the Events Center, but the city has at least short-term agreements in place to continue offering food to visitors.

The city of Westfield is the master leaseholder for the facility, which was developed by Holladay Properties, and subleases it to other tenants.

Local entrepreneur Casey Wright developed the NinjaZone curriculum and has licensed 240 gyms throughout the country.

“Historically, the program has always originated in gymnastics gyms,” Megan Noel, director of marketing and public relations for NinjaZone, said. “We found after licensing all these gymnastics studios, the need was greater.”

“We found that we were needing to open these academy locations,” Noel said. “All ninja, all the time.”

She said they picked Grand Park for the first NinjaZone academy because it exposes the concept to kids playing other sports.

It’s also conveniently located near Wright’s FUNdamentals gymnastics club, where NinjaZone is currently offered. Noel said that program will continue, but the curriculum will be slightly different from the Grand Park location because the academies will have special equipment not found in all gyms, like climbing walls.

The concept won’t be unique to Westfield for long. NinjaZone is also in the process of opening a 5,000-square-foot location at 116th Street and Olio Road in May. And the hope is to continue expanding the academies after the Westfield and Fishers locations open.

“We kind of approach everything as an experiment,” Noel said. “We’ve had a lot of great interest so far and we hope it continues that way.”

The five-year lease for the nearly 3,000 square feet of space in the Events Center will cost NinjaZone $59,780 annually. The city has agreed to provide a credit of up to $34,970 over the course of the lease for tenant improvements made to the space.

Only one space remains on the first floor, and city officials are hoping to reach an agreement with a sports retailer soon.

On the second floor of the facility, Methodist Sports Medicine plans to establish a clinic for athletes and patients that will be staffed by athletic trainers, physical therapists and an orthopedic doctor.

The clinic, which is expected to open this spring, will have X-ray capabilities and equipment like crutches and braces. Methodist Sports Medicine also plans to staff sporting events at the facility with medical personnel.

The sports medicine specialists offer services at four other locations, and they also have a partnership with the Indianapolis Colts.

The five-year lease will cost $54,098 for the first year and will increase by 2 percent every year.

The city is also offering about 4,400 square feet of general office space for lease on the second floor, with room for nine individual offices and an executive boardroom and two conference rooms that would be shared by the tenants.

Grand Park officials said they are in negotiations and have verbal commitments for seven of the offices, but nothing has been confirmed yet.

Also on the second floor, the Indiana Soccer Association and Indiana Sports Properties lease nearly 4,000 square feet of connected office space. The annual rent is $63,712, and the lease is for five years.