Kite Realty Group Trust has confirmed that a new Kroger Marketplace will anchor its redevelopment of Fishers Station shopping center.

Indianapolis-based Kite filed plans earlier this year signaling it would demolish the vacant Marsh store at the center, which sits in the high-traffic intersection of Allisonville Road and 116th Street. 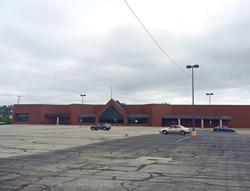 According to those plans, Kite would remove the western portion of the development, expand the property by more than three acres to the north, construct a new anchor building and add several smaller buildings for retail shops.

Kite announced earlier this week that a new 123,000-square-foot Kroger Marketplace will serve as the anchor tenant in the center of the property. The Kroger store is more than double the size of the previous anchor operated by Marsh Supermarkets Inc.

Marsh closed the 57,600-square-foot store (see accompanying photo) in 2015, along with several other Indianapolis-area locations.

Kite also said it has signed leases with Jason’s Deli and Tequila Sunrise for an additional 10,700 square feet, but it’s not clear where those tenants will be located within the retail center. It will be the second location for Mexican restaurant Tequila Sunrise, which is currently open in Brownsburg.

The announcement also says the company plans to “relocate several existing tenants,” but did not specify which ones. Goodwill, Little Caesars Pizza, The Nail Studio, Majestic Foot Spa, Total Tan, Indiana Blood Center and Cold Stone Creamery are all in the area slated for demolition, according to public documents.

Documents for the project do include renderings of a Goodwill store, so it seems likely it will still have a presence in the remodeled shopping center.

The cost of the redevelopment project is unknown, but Kroger spokesman Eric Halvorson said the new store will cost more than $20 million.

The existing Kroger across Allisonville Road in the Fishers Crossing shopping center will close, but the gas station on the northwest corner of Allisonville and 116th Street will remain open, Halvorson said.

Kroger officials previously told IBJ that there isn’t room to expand or remodel the existing store, which is why it wanted to pursue building a new one. But the gas station, according to Kroger, would be too difficult to relocate.

About 300 to 350 employees will be needed for the new store, and some of the employees from the existing store will move to the new one. According to Kite, construction on the Kroger will begin “in the near future.”

The site plans submitted by Kite do not specify square footage of any of the other new structures.

The eastern side of the retail development where Mexico City Grill and Dollar Tree are located, and where Stacked Pickle previously operated, would remain. Last year, Stacked Pickle moved its Fishers location to the former Bagger Dave’s Burger Tavern on State Road 37.

The outlot buildings along 116th Street also don’t appear to be impacted by the redevelopment.