The city of Fishers is moving forward with its new police headquarters project one section at a time.

The Fishers Board of Public Works on Monday approved a $5.7 million contract with Fishers-based Hagerman Group to construct the 240-spot parking garage that will be adjacent to the new 50,000-square-foot police headquarters. 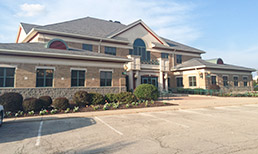 The total cost of the project is expected to be between $12 million and $14 million.

The police station and garage will be located where the Fishers City Court building previously stood, directly to the north of the Braden Business Systems Inc. headquarters that is under construction on the corner of North Street and Municipal Drive.

Fishers Mayor Scott Fadness said the city wanted to get the project moving forward, which is why it decided to approve the agreement for the garage separate from the station. The final plans for the police station also will require approval from the Board of Public Works.

Hagerman will operate and maintain the garage until Aug. 1, 2018, at which time ownership will be transferred to the city. Construction is expected to be completed before that date.

Fadness proposed the new police station in the fall, saying the crime lab, patrol division, internet crimes division and property room are all out of space in the existing police headquarters (see image above), which is adjacent to City Hall.

The new facility would provide room for special operations, evidence storage, processing labs, training, a gym with lockers, an armory and intake/processing.

It also would allow the city to consolidate police operations into one facility. Right now, the city pays $36,000 annually to rent additional space for police.

In late November, the Board of Public Works approved a $510,000 scoping agreement that included developing more detailed designs and construction plans with Hagerman for both the garage and police station after issuing a request for proposals earlier in the fall.

The board approved the garage agreement unanimously on Monday.