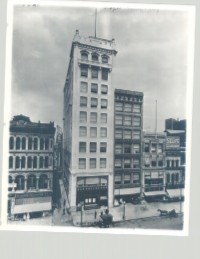 The city has agreed to hand over architectural artifacts from a landmark downtown building to a historic preservation
group. The Historic Landmarks Foundation of Indiana plans to auction off pieces from the parapet that once stood atop the
Indianapolis News-Goodman Jewelers Building along Washington Street. The building, just east of the Conrad Hotel, now is home
to Capital Grille on its first floor and high-end apartments upstairs. The city removed the terra cotta parapet several years
ago for safety reasons after parts of it fell, but it was never reinstalled in a redevelopment project. The city had been
storing the pieces in Union Station, where a Cadillac Ranch theme restaurant is now planned. The historic group picked out pieces that could
be used as table bases, benches and lawn art, about an eighth of the former parapet, said Chad Lethig, the group’s Indianapolis
Preservation Coordinator. 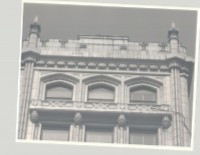 They plan to auction them off at a holiday party in December; proceeds will be split between Historic
Landmarks and IHPC. "While we would prefer to see the items returned to the building, it would be a shame just to pitch
them in the landfill," he said. "They are very cool pieces, especially if someone could ‘think outside of the box’
for their adaptive re-use." Anyone have ideas?