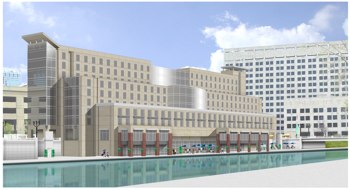 This is one of four proposed projects for an acre of state-owned land along the canal between Ohio and New York streets. What do you think? Property Lines has been asking for the other renderings but so far to no avail. This proposal, from Browning Investments and Dora Brothers Hospitality, calls for more than 250 hotel rooms and retail space, including along the canal.