The Fort Harrison Reuse Authority won approval from the City of Lawrence last night for the final phase of a decade-long redevelopment of Fort Benjamin Harrison. 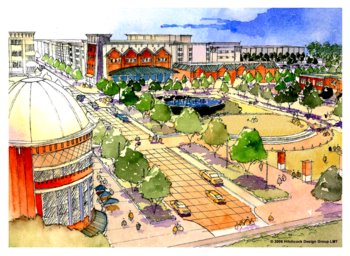 The roughly 90-acre Lawrence Village at the Fort calls for a new downtown with shops, offices and public plazas (pictured) mixed among as many as 1,000 condos, townhouses and apartments. The area to be developed is bounded by Post and Lee roads and 59th and 56th streets. Plans for the community were developed by the Reuse Authority in partnership with Carmel-based Eden Land & Design Inc., the city of Lawrence and Indianapolis-based Browning Investments Inc. The Reuse Authority plans to begin site improvements in August.