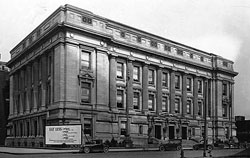 The Department of Metropolitan Development is seeking two independent appraisals of Old City Hall, the historic building that has housed the State Museum and now houses the interim Central Library. In January 2008, the library is slated to vacate the stately building, shown here in a 1918 photo from the Indiana Historical Society. After the library leaves, the city likely will issue a request for proposals to determine the property’s future. Ideas?