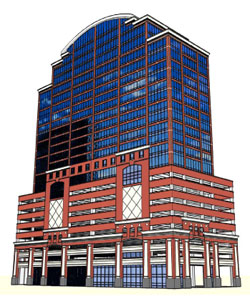 A development team including locally based Prince/Alexander Architects has filed plans to build a 24-story tower between Eli Lilly & Co.’s Faris Campus and Lucas Oil Stadium. The $47-million project calls for 200 full-service hotel rooms and 48 luxury condos. West Merrill Tower is one of several proposals that would add hotel rooms downtown. For more information, check out the full story here. Do you like the look? Do you think they can pull it off?