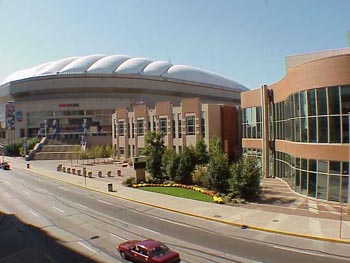 In the spirit of today’s Colts festivities, there’s an update this week on the new stadium and discussions about the old one. In a progress report, the Indiana Stadium and Convention Building Authority says officials are studying whether to implode the RCA Dome or take it down with a wrecking ball. They’re leaning toward a wrecking ball because of the building’s connection to the Indiana Convention Center. The demolition is slated to begin in April and likely will take about six months. The Authority also said Lucas Oil Stadium still is on schedule for its grand opening in August 2008. About 900 people are working on the project, and more than $311 million has been spent so far. Any Colts or stadium observations on this beautiful game day?