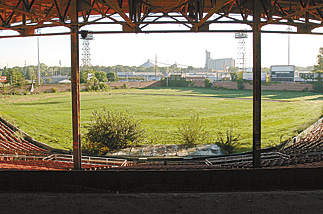 What should be done with Beautiful Bush Stadium? The city has ordered appraisals of the historic ballpark as a first step toward eventual reuse or demolition. The Indianapolis Indians played in the West 16th Street stadium until 1996, when they moved to Victory Field. After that, the ballpark briefly served as home to a midget-car racetrack. The 76-year-old stadium now is owned by the city’s parks department and is overgrown with weeds. To read more, check out the full story from this week’s IBJ print edition. Photos