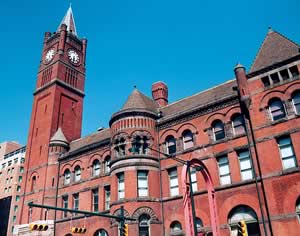 The city has reached a preliminary agreement to lease 12,600 square feet in the basement of Union Station for a new restaurant and nightclub. The lease is with The Arantee Group, one of the owners of 6 Lounge & Restaurant on Meridian Street. The new club would take space in the basement of Union Station along Illinois Street. The space, last occupied by Iron Horse, has been vacant 12 years, said Mary Hauser, an asset manager with Browning Investments. Browning is the listing agent and property manager for the 231,000-square-foot Union Station, which is now 95 percent occupied. The preliminary deal calls for up to $300,000 in landlord improvements and a 10-year lease that averages $10.30 per square foot.

Elsewhere at Union Station: The largest space still available in Union Station is the former home of El Sol restaurant. That lease was terminated in April. Several restaurants are interested in the space, but the high cost of renovation has slowed progress, Hauser said.