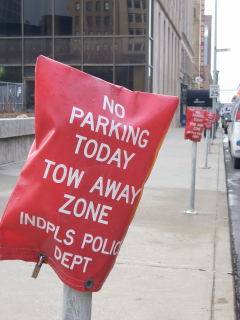 The cost of parking is one of the top reasons office space has been a tough sell downtown when compared to the suburbs. But it’s not a problem if you’re the mayor-elect. Thanks to a favor from the IMPD, Greg Ballard and his transition team are enjoying free parking downtown. The team has moved into part of the ninth floor of the Majestic Building at the corner of Pennsylvania and Maryland streets. Police have bagged every parking meter along the block west of the building as a courtesy for the new mayor. Transition spokesman Robert Vane confirmed the temporary arrangement.