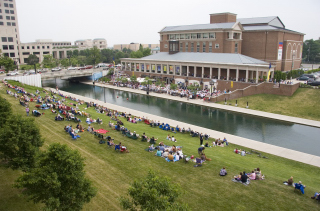 A community group is calling on state and local government officials to preserve a one-acre lot along the Central Canal as Lincoln Park in honor of the former president. The narrow strip of land between Ohio and New York streets, which abuts a state parking garage, was left vacant to allow for future development. But now, a group called Canal Park Advocates says the seemingly unremarkable land has “exceptional social, inspirational and cultural value.” They want it preserved in time for next year’s 200th anniversary of Lincoln’s birthday. “While it is an open hillside, and certainly not a redwood forest, it has tremendous cultural potential,” Cathy Burton, president of the Marion County Alliance of Neighborhood Associations, said in a statement. Two teams are vying to develop the site, and both envision a hotel and retail space. Renderings of the proposals are here and here. Is the community group choosing its battles wisely?