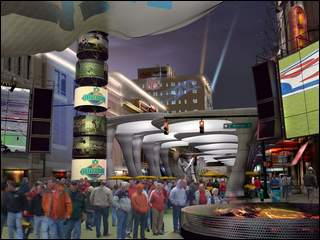 News of Indy’s successful bid for the 2012 Super Bowl spread quickly among Hoosiers here in Las Vegas. Already, the selection has become a part of sales pitches for new central Indiana developments. But will it provide enough of a boost to compel some of the city’s most aggressive development proposals such as Penn Centre and SoDo? Brokers expect the big game will add to the city’s momentum, but it won’t fundamentally change the market, lead to a rush of new projects or do much to calm a rocky economy. But it could create some urgency for new restaurants, hotels and retailers to open for business by 2012. Ralston Square, a mixed-use development slated for the northeast corner of Meridian and South streets, is slated to be open in time for the Final Four in 2010, said Brian Epstein, the lead developer. The project should be well established by 2012. “Certainly the cachet of being able to host the event will be great for downtown,” Epstein said. “Itâ€™s another big event we can put on our calendar.”


UPDATE: Legends District SoDo is on track to be finished in time for the 2012 Super Bowl, developer Ryan Zickler said today. He said he’s been talking with the city about incentives and with performing arts groups about a theater. Zickler believes the big game will help him sell the concept.