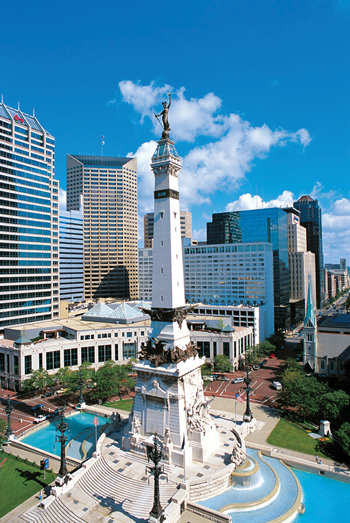 A group of local business and civic leaders are hoping to transform Monument Circle into a grand public space in the European model, a pedestrian-friendly piazza that draws crowds year-round to mingle and dine and watch performances in the shadow of the Soldiersâ€™ and Sailorsâ€™ Monument. The group in July began a lively discussion of how to improve the Circle, including the possibility of closing it to car traffic. The Central Indiana Community Foundation commissioned a study of the Circleâ€™s potential from Project for Public Spaces, a not-for-profit based in New York. The group suggested a framework for turning the Circle into the â€œcenter through which Indianapolis can create its future and showcase itself to the world.â€ â€œMonument Circle is the focal point of the city and downtown and in many ways the entire state,â€ the report said. â€œIt is one of a kind and means many things to many people, but does not yet provide the regular reasons to come and participate in the space.â€ To read about the group’s recommendations, check out the full story. What do you think? Would you like to see the Circle closed to cars?