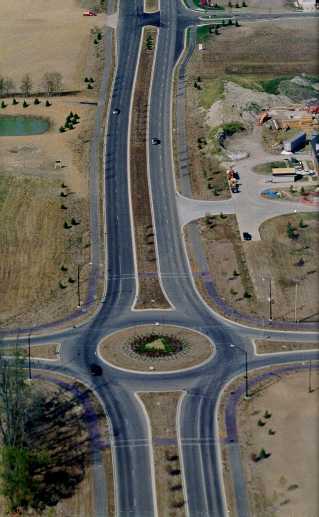 Carmel’s plans for a total of 60 roundabouts by 2011 drew gasps of admiration from the crowd at this year’s National Roundabout Conference. And ultimately, the city’s dedication to the trendy traffic solution helped it win a bid to host the 2011 National Roundabout Conference. â€œWe have already seen about an 18 percent decrease in the number of accidents along Keystone in 2008 compared to 2007,â€ Mayor Jim Brainard said in a statement announcing the win. The gasps came when Carmel City Engineer Mike McBride told attendees to this year’s conference in Washington, D.C., that by 2011, Carmel would have more than 60 roundabouts within five miles of its Renaissance Hotel. “They were impressed with the sheer number and density of roundabouts in our community,” McBride said in the statement, which is available here. “Conference attendees really want to see actual roundabouts in operation and Carmel offers the opportunity to see a large number of roundabouts in a short distance.” Commence witty banter.