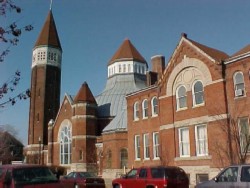 Historic Landmarks Foundation of Indiana has taken over the Romanesque Revival former church known as Old Centrum along Central Avenue at 12th Street. The foundation already is working to stabilize the building, which opened in 1892 as the Central Avenue United Methodist Church, and is considering moving its headquarters there. The building most recently provided offices for a handful of not-for-profit groups, but it closed in March 2008 as the caretaker, Old Centrum Foundation, fell behind on maintenance. Historic Landmarks is taking over the building by virtue of a loan it had provided to the foundation, said Marsh Davis, the group’s president. The previous owner had estimated a full restoration could cost as much as $10 million. Davis said the first priority is to save a building that’s in bad shape after two years of sitting vacant. Discussions about whether to move the Historic Landmarks headquarters and its 22-person Indianapolis staff could come later.

The full story is here. (Subscription only: Take the plunge and subscribe to the web site, print edition and book of lists for less than than 19 cents per day, on our subscription page.)