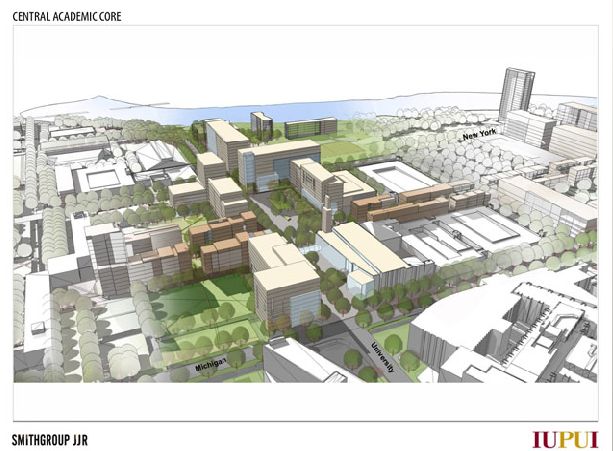 Indiana University has released a master plan for its Bloomington and Indianapolis campuses that suggests some dramatic changes over the next several years. The plan for IUPUI suggests Michigan and New York streets be converted into two-way thoroughfares with center medians as part of an effort to better connect the campus and make it more walkable. It also envisions larger and taller buildings (shown at right) to enhance the urban appeal, along with the development of Vermont Street as a “vibrant urban streetscape” and the use of the Blackford Street area as an extension of the Cultural Trail. Ultimately, the goal is to better connect the campus to White River and downtown. The plan was created by Washington, D.C.-based architectural firm SmithGroup/JJR. You can check out some highlights of the plan, including more detail on the proposals for the Bloomington campus, here and here. Thoughts?