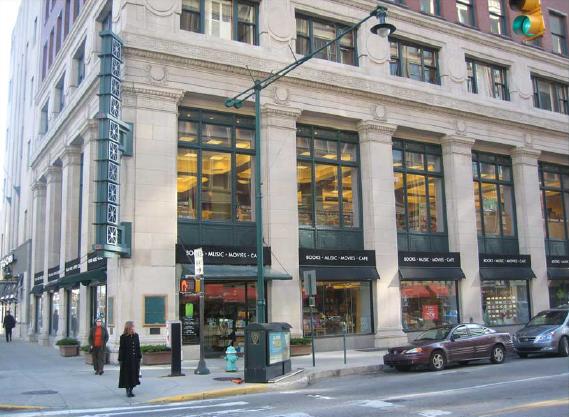 The bookstore chain Borders Group Inc. is looking for a replacement tenant for its 22,000-square-foot store at the corner of Meridian and Washington streets downtown. The Ann Arbor, Mich.-based chain is marketing the property to potential replacement tenants but has made no final decision on whether to close, a spokeswoman said. The bookstore chain occupies two floors of the 17-story Barnes & Thornburg Building at 11 S. Meridian St. across from Circle Centre mall. Broker Bryan Chandler of Eclipse Real Estate is marketing the property. The opening of the Borders in 2001 was an encouraging sign that the mall was helping to drive new street-level retail downtown. Losing the store could be a devastating blow, adding a second major vacancy to one of dowtown’s marquee corners. Flagstar Bank left the northwest corner last year for space a few blocks away. And mall anchor Carson Pirie Scott at the southwest corner also could be at risk: Its parent Bon-Ton Stores Inc. has been struggling with more than $1-billion in debt and is often mentioned as a candidate for bankruptcy. Borders has had its own financial troubles and today is trading at about 52 cents per share.