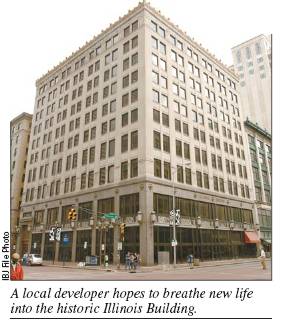 A local developer is working on plans to save the vacant 10-story Illinois Building, considered in recent years as one of the state’s most endangered historic structures. Halakar Properties Inc. has put the Illinois Building under contract, and has been meeting with city officials about a tax abatement that could help return retail space to the first floor and turn the upper floors into apartments, industry observers told IBJ for a story published in this week’s print edition. The 1925 building at the southeast corner of Illinois and Market streets has generated plenty of interest among potential tenants in recent years. But the building, which last housed a food court and a gym, has been vacant since 2003 thanks in large part to a legal battle between the owners of the building itself and separate owners that control the land underneath. The Halakar contract would bring the parties in that dispute together. The company, which developed the 3 Mass condo and retail project, has been talking with potential development partners for the project. No cost or time line was available. The full story is here.