Check out brand-new renderings of a $23 million residential and retail development planned for the land surrounding the Barton Tower apartments along Massachusetts Avenue between Michigan and East streets. The project is a partnership between Flaherty & Collins Properties and Insight Development Corp. It calls for a mix of 144 affordable and market-rate apartments and retail/restaurant space along Mass Ave. The project, tentatively dubbed The Millikan on Mass Ave after an apartment building that once stood on the site, is being designed by Ratio Architects and A2SO4. 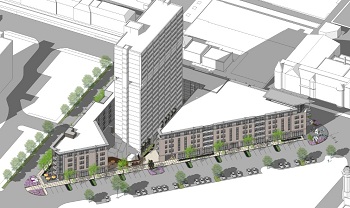 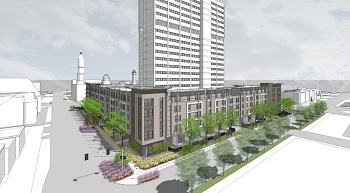 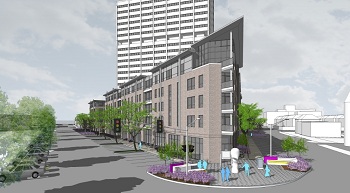 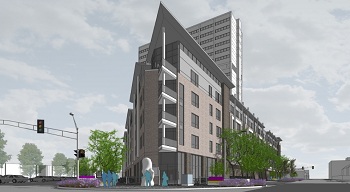 The developers plan to present the renderings at an Aug. 1 hearing of the Indianapolis Historic Preservation Commission. The site now includes a park and parking that wraps around the 21-story Barton Tower, which is owned by the Indianapolis Housing Agency. Construction on the $11.5 million affordable housing component, planned for along East Street, is set to begin in the fall, said Bruce Baird, president of Insight Development, a not-for-profit developer affiliated with the IHA. Baird said financing for the market-rate portion isn’t in place because the development team is waiting to see if it can secure financing in conjunction with a larger project it hopes to build across Massachusetts on a half block now occupied by Indianapolis Fire Department. The Insight/Flaherty team is one of five developers that submitted a proposal to redevelop that city-owned site. What do you think?