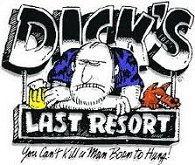 Are these guys morons? The privately held casual dining chain Dick's Last Resort plans to open along Maryland Street just west of Illinois Street. The Nashville-based chain known for surly servers who heave (mostly playful) insults on guests is taking a 6,400-square-foot space that's not been kind to similar (but friendlier) concepts including Houlihan's and Buffalo Wings & Rings. But Dick's management is confident the spot's proximity to the Indiana Convention Center and several hotels will work for its bar and grill concept that features a staff trained in the art of obnoxious. They plan to open in the fall. "We're all so kind here, they might have to import the rude people," joked Steve Delaney, who brokered the lease deal, but he says the chain owners "actually are very nice people." By the way, apparently women are more interested in stomaching insults along with their burgers and barbecue. Some 62 percent of Dick's customers are women, Delaney said. Go figure.