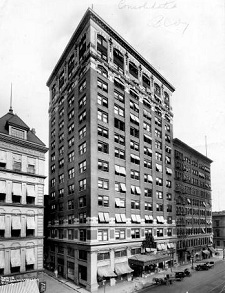 Two local buyers are angling to revitalize a 15-story downtown landmark that has confounded redevelopment attempts since its last tenants departed in the late 1990s. Ambrose Property Group and The Whitsett Group hope to transform the brick and terra-cotta Consolidated Building at 115 N. Pennsylvania St. into 98 apartments with first-floor retail or restaurant space. The developers plan to invest $16 million to acquire and restore the building, betting plenty of folks who work in the trio of office buildings steps away from the Consolidated—Chase Tower, Regions Tower and BMO Plaza—will be eager to live close to work. Ambrose and Whitsett expect to close on the purchase of the building from an affiliate of New York-based Crown Properties in October and start construction in the spring. The Consolidated was built in 1910 as an annex to the adjacent Lemcke Building, now home to The National Bank of Indianapolis, and once contained a vaudeville theater. A seven-story annex was added in 1974. The building’s downfall began in 1992, when anchor tenant Indiana Insurance vacated 10 floors and moved to the suburbs. The last remaining tenants, Downtown Comics on the first floor and The Cozy restaurant on the second, departed by 2000. For much more, including how they plan to finance the project and address the building's lack of parking, read our full story. (Subscription required.)