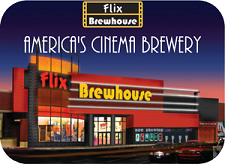 Cinema-eateries have come and gone in Indianapolis, but a more modern take on the well-worn model may be headed to the city. Local real estate sources attending the annual convention of the International Council of Shopping Centers in Las Vegas say Flix Brewhouse in Round Rock, Texas, is looking to expand, and Indianapolis is on the list. Flix bills itself as the only first-run movie theater in the world to incorporate a fully functioning microbrewery while serving fresh food. The company says it brews six of its own beers and offers 40 other draft brands, in addition to a wide selection of wines. The “Flix Mix” lobby is open seven days a week to non-moviegoers who might want to grab a bite and a beer without viewing a film. Where Flix might locate remains uncertain.