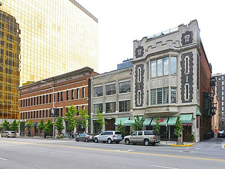 A trio of downtown buildings on the block for $4.9 million is hardly sexy enough to warrant the public’s attention, unless one of those is the historically lavish residence at 121 E. Ohio St. The buildings are owned by John Irish, a former longtime local contractor and supporter of the arts, and have been on the market now for almost 60 days. Listing agent Deborah Dorman of Encore Sotheby’s International says she’s received inquiries from as far away as the United Kingdom but no serious offers yet. “It’s a special property,” she says. “It’s not your typical Indianapolis/Carmel home.” Indeed, downtown’s “finest piece of real estate” features a home theater, a staging area for entertainment, European classically designed gourmet kitchen and a rooftop area spread among five stories. Listing materials describe it as a “world class residence that entertained celebrities and politicians from all over the world.” Built in 1907, the building has been owned by Irish, who still resides there, for about 40 years, Dorman said. Two neighboring buildings also are included in the sale. One, at 115 E. Ohio St., houses the upscale Chef Joseph’s at the Connoisseur Room. The restaurant leases the space from Irish.