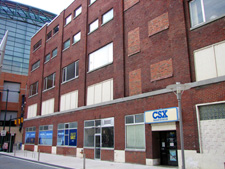 A couple of new locations have emerged in the sweepstakes to land the operations of the Indianapolis Star, now that the newspaper’s search for new office space is getting more serious. Downtown real estate brokers say the Star is exploring space within what’s known as the CSX Building at the southwest corner of Pennsylvania and Georgia streets across from Bankers Life Fieldhouse. At one time, a police museum had been slated to occupy the building, and most recently, the first floor morphed into a temporary bar during Super Bowl festivities last year. More surprising is talk that the state’s largest daily is considering taking a portion of the space vacated by Nordstrom within Circle Centre mall. Mall manager Simon Property Group Inc. has had no luck filling it since the anchor left two years ago. The other two options that keep getting bandied about are space within BMO Plaza and Regions Tower. Meanwhile, The Whitsett Group, the buyer of the Star’s 190,000-square-foot building at 307 N. Pennsylvania St. and its 500-space parking garage, plans to start construction by the end of the year on a building on the Star’s property, at the corner of Delaware and New York streets, principal Joe Whitsett said. Whitsett’s plans call for up to 500 apartments in three buildings and a bit of retail space that might attract a bank branch or restaurant.

UPDATE: Star Publisher Karen Crotchfelt says the newspaper is negotiating with Simon to take a portion of the Nordstrom space. Here's our story.