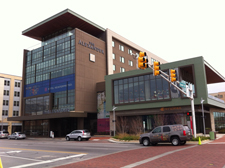 CityWay, built on 15 downtown acres at South and Delaware streets, includes apartments, a hotel and about 25,000 square feet of retail.

• GEICO, for Economic Development Project of the Year: The consumer insurance giant earlier this year leased 109,000 square feet of space in a 320,000-square-foot building that is part of the Carmel campus for Technicolor USA Inc. and plans to create 1,200 jobs.