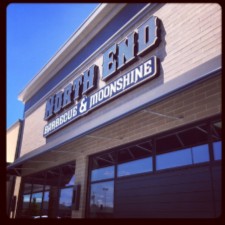 “It’s a fantastic location,” Nelson said. “The Nora area itself doesn’t really have a sit-down restaurant, and there’s a ton of office space around here.”

Local foodies know Nelson from his first restaurant, Late Harvest Kitchen, which he opened in 2012 near Keystone at the Crossing.

North End occupies 4,700 square feet and anchors the eastern portion of the 8,000-square-foot Nora Shops West, which also is home to a Starbucks. Artisano’s Oils & Spices is on track to open in July and will bring the building to full occupancy.

Nelson’s restaurant seats about 150 and will have space for another 50 once the outdoor patio opens. That should happen within the next week.

— The Room Place opened May 23 at 8401 N. Michigan Road in 40,500 square feet formerly occupied by a Gold’s Gym. The Woodridge, Ill.-based furniture store has locations in Castleton, Carmel and Greenwood.