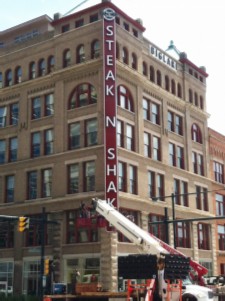 Property Lines reported earlier this month when the letters to spell Biglari, as in San Antonio-based Biglari Holdings Inc. and parent of Steak n Shake, became affixed to the side of the Ober Building facing Pennsylvania Street.

An affiliate of Steak n Shake purchased the six-story office building at 107 S. Pennsylvania St. in February 2013 for $3.1 million from the Capital Improvement Board of Marion County.

Biglari Holdings is led by CEO Sardar Biglari. As of April, it operated 530 Steak n Shake restaurants, 415 of which were company-owned, and 83 Western Sizzlin eateries.