Former Indianapolis Colts linebacker Gary Brackett only opened his Georgia Reese’s Southern Table & Bar creation on the northwest side in September. But already he has a second location in the works—downtown. 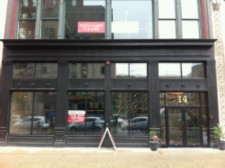 The upstart restaurateur is finalizing a deal to take roughly 5,600 square feet of prime retail space at 14 E. Washington St. to the east of Jos. A. Bank and just south of Monument Circle. Brackett said he hopes to have it open by the end of May.

“That’s a natural step for us,” Brackett told IBJ. “With all of the apartments coming online and the conventions, when people come in from out of town, they want to support local restaurants that have a different menu than what they’re traditionally used to.”

“We’re really excited to have Gary bringing this concept to the McOuat Place,” Demaree said. “We’ve been holding out for the right concept for an awful long time and we really believe they are an ideal fit for the building.”

Brackett has other restaurant holdings outside of Georgia Reese’s. On Oct. 31, he bought the remaining shares of the local Stacked Pickle chain from founder Chris Long.