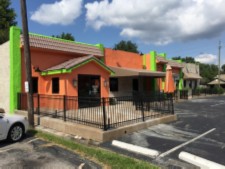 Restaurants and retailers are coming and going between summer rain storms:

• Luciana’s Mexican eatery (see photo) is opening at 1850 Broad Ripple Ave. in the space last occupied by the fine-dining spot Taverna, whose stint lasted less than two years. The restaurant is just west of Boogie Burger.

• Discount Tire is building a shop on the property at 7280 N. Keystone Ave. where the former Chinese Ruby restaurant stood, across from Norgate Plaza.

• Bar Louie has filed plans to open in 8,000 square feet of space formerly occupied by Bravo! Cucina Italiana in the Greenwood Park Mall. A cut above the typical sports bar or wing joint, Chicago-based Bar Louie closed its Clay Terrace location in Carmel in 2012. It has restaurants in Evansville, Merrillville and Mishawaka.

• Teriyaki Madness has filed plans to open in 1,500 square feet at 3317 E. 86th St. across from the Fashion Mall at Keystone. The restaurant would be the Las Vegas-based chain’s first in Indiana.

• Fresh Thyme Farmers Market on Thursday will open stores at 3400 E. 146th St. in Westfield and 11481 E. 116th St. in Fishers, bringing the Phoenix-based specialty grocery’s offerings in the Indianapolis area to five.

The Westfield Fresh Thyme is in the Bridgewater Center at the northeast corner of 146th Street and Carey Road, and the Fishers location anchors a commercial development on 116th Street just east of Hoosier Road.

• The Chase bank branch at the corner of 38th Street and Washington Boulevard closed July 30. Another Chase branch at 2955 Dr. Martin Luther King Jr. St. is set to shut its doors Aug. 20.

• O’Charley’s at 3851 Vincennes Road on the northwest side has closed. The Nashville, Tennessee-based chain has four remaining locations in Indianapolis and one in Avon.