An entertainment venue that challenges participants to escape from themed rooms by solving riddles is coming to downtown Indianapolis. 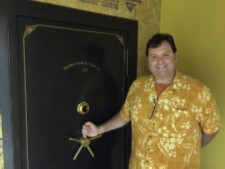 The Escape Room is set to open Oct. 2 in 5,000 square feet of space in Station Place, above The Old Spaghetti Factory on South Meridian Street.

Partners include Scott Neal, 50, a corporate pilot who was let go from his job in 2013. He first discovered the escape-room concept in Budapest, Hungary, last year while traveling with his wife in Europe.

Already a worldwide phenomenon, escape rooms are a gaming trend that’s suddenly hot in America. The escaperoomdirectory.com site shows that more than 200 have sprouted up in the United States alone.

Neal’s will be the first in Indiana.

“It’s an excellent team-building opportunity for corporations,” he said. “That’s what we’re going to try to focus our weekday business on.”

The Escape Room will feature five rooms of various sizes to accommodate both small and large groups. Groups can choose from a bank lobby, a KGB interrogation room, an art gallery, a jail and a Hoosier Hysteria sports-themed room.

Groups will need to solve about 15 clues and puzzles within an hour to escape their rooms. It won’t be easy, though. Neal estimates the success rate will be about 25 percent.

In the jail, for instance, the wrongfully imprisoned need to break out and find the evidence to prove their innocence.

Neal and his partners are sinking about $350,000 in the venture.

“We buy authentic props,” said Neal, pointing to a bank vault door that was recently installed.

Neal has applied for a beer and wine permit and plans to cater events.