The YMCA of Greater Indianapolis on Thursday gave media members a sneak peak of its new downtown CityWay facility before it opens to the public Dec. 15. 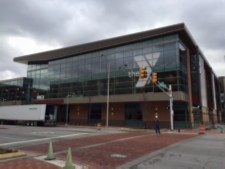 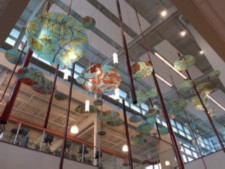 Greeting visitors in the lobby area is an artist’s rendition of trees hanging from the ceiling. The artist, Stephanie Cochran, a student at the Herron School of Art and Design, spent time as a child at the Flat Rock YMCA camp southeast of Shelbyville, where her father was a director. 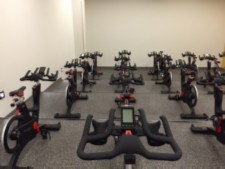 The ground level of the CityWay YMCA sports a child-care facility, teaching kitchen where healthy-cooking classes will be offered, a community room available for special events and the Hoaglin to Go cafe. 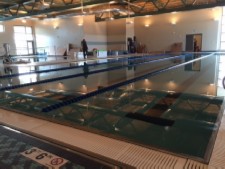 A large workout area on the second floor boasts 107 pieces of cardio exercise equipment, in addition to the running track circling the basketball courts from above.

Outside, a rooftop garden awaits someone with the expertise to cultivate vegetables that perhaps can be used by a local restaurant. 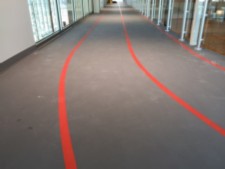 Forty percent of the exterior walls are glass, giving members outside views throughout much of the building.

And for the runners: 10 laps around the track equals one mile.

The architect for the project is Browning Day Mullins Dierdorf Architects.

Buckingham is planning a second phase of CityWay and should begin construction early next year.