The city of Indianapolis is poised to give $4 million to the Indiana Repertory Theatre to fund major repairs to its historic downtown building as part of a new lease agreement between the two. 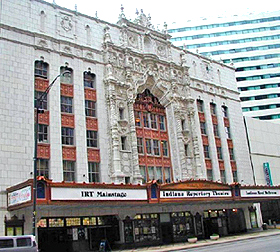 Built in 1927, the city-owned landmark at 140 W. Washington St. has housed the Indiana Roof Ballroom since its opening and has served as IRT’s home for 35 years.

The city plans to tap its downtown tax-increment financing fund to provide the $4 million. But the gift is contingent upon the IRT signing a new, 10-year lease that the two sides are close to agreeing upon.

The not-for-profit’s lease with the city expired nearly two years ago, and it’s since been operating on a month-to-month basis.

In the past, the city’s Department of Metropolitan Development has funded building repairs by earmarking $200,000 annually from its budget, including $50,000 for insurance costs.

Under the new, 10-year agreement, the city would no longer be responsible for building maintenance. Instead, IRT would contribute $150,000 annually in lieu of rent to a fund to cover future repair costs.

The $4 million is no “silver bullet,” said Jason Dudich, Mayor Greg Ballard’s chief of staff, but “it’s a starting point.”

The checklist for the $4 million includes installing a new roof, restoring the facade, tuck-pointing the entire building, repairing damaged plaster in the stairwells, repainting walls and ceilings, replacing the building’s entire control system and replacing or rebuilding air-handling units.

This isn’t the first time the city has tapped TIF money to pay for repairs at one of its historic buildings. Last year, it used $3.7 million to shore up Union Station.

The city also is considering entering into a property management agreement for the theater building with an entity of Jack Bayt’s Crystal Catering. Ballroom Holdings LLC already manages the ballroom and has proposed handling the entire building.

Ballroom Holdings submitted the lone proposal earlier this year when the city attempted to find a partner to manage and redevelop the building.

It’s an old, old building,” she said. “There’s just a lot of wear and tear on it, but we love it. We don’t want to be anywhere else.”

The city became the building’s sole owner in May 2014. An inactive organization called the Downtown Merchants Association had owned the building with the city.

The six-story structure was added to the U.S. National Register of Historic Places in 1979.

Sweeney said $5.5 million will be used to bolster the organization’s existing endowment, and $1 million each will go toward a “major” gifts campaign and theatrical capital needs.