But the preliminary plan received a chilly reception Wednesday from members of the Indianapolis Historic Preservation Commission. 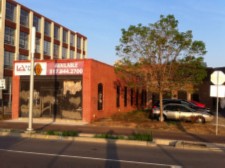 The local multifamily developer is proposing to demolish a vacant structure at 720 N. College Ave., across the street from where its Circa apartments project is under construction. In its place, it wants to build a five-story apartment building with 32 units and up to 65 parking spaces.

The two-story brick building that Milhaus wants to tear down dates to the 1890s, although several additions were made up until the 1930s.

“It would be impossible for me to support tearing this down,” IHPC member Susan Williams said.

Other members agreed, instead encouraging Milhaus to incorporate aspects of the building into the design or at least save the façade.

“It strikes me as an opportunity to come in with an unusual solution rather than a predictable solution,” IHPC Chairman and Ratio Architects Inc. founder Bill Browne said. “It may be economically impossible, but it’s something to think about.”

About 20 residents of the Chatham Arch neighborhood, many from the Mill No. 9 building just to the south of the property, attended to voice their displeasure with Milhaus’ plans.

Milhaus presented its plans to IHPC in what’s called a preliminary review, in which the commission takes no action. If Milhaus wants to pursue the project, it could return to IHPC with an actual filing that would be voted upon.

The firm is evaluating the feedback from IHPC members to determine how to move forward, Jeremy Stephenson, executive vice president of development, said Thursday morning.

The property at 720 N. College Ave. is owned by Lyle Feigenbaum, who operated the Scholars Inn Restaurant and Lounge on Mass Ave until 2010. At one time, he had planned to remodel the building for a bakery.

Feigenbaum said in a letter to IHPC that he has had “zero interest to even negotiate a deal to sell or lease due directly to the condition of the building.”

Many of the walls are crumbling, the second floor is in such poor shape that it’s too dangerous to walk on, and there’s no plumbing or electricity in the building, he said.

Feigenbaum would team with Milhaus on the project, similar to the partnership they’ve forged to develop the two remaining lots on the east side of North College Avenue and south of Mass Ave. for another apartment project with retail on the ground level.