There’s no longer any retail space available at the new Millikan on Mass apartment project, located on the triangular block bounded by Massachusetts Avenue and Michigan and East Streets. 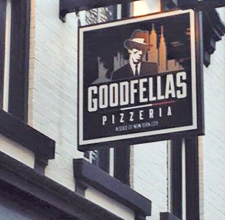 Lexington, Kentucky-based Goodfellas Pizzeria is the latest eatery to commit to the second phase of the development, following seafood restaurant Sea Salt on Mass. Sea Salt will be operated by Shawn Cannon, an investor in Tow Yard Brewing, and should open in the summer.

In addition, Escape The Room is poised to join the three restaurants at Millikan. The interactive puzzle room has two locations in New York City.

Goodfellas is set to occupy 3,500 square feet and could open by early fall, said Gary Perel, a retail broker at Alo Property Group who represented the pizzeria. Goodfellas ownership said in an e-mail it wasn’t ready yet to discuss further details.

The pizzeria has three locations in Kentucky—two in Lexington and another in Covington—and one outside the state, in the Over the Rhine neighborhood in Cincinnati.

The mob-inspired menu of specialty pies includes The Don, The Vinny, The Boss and The Bootlegger, topping out at $28.95 for the largest size. Sub sandwiches, salads, sides and desserts also are available.

Goodfellas is taking the space that Lincoln Square Pancake House had committed to before backing out.

The local breakfast chain now expects to open its latest outpost, in Irvington in the space formerly occupied by Dufour’s at 5648 E. Washington St.

Dufour’s closed Jan. 31, when owner Maria Dufour retired. The restaurant had been an Irvington fixture since Maria and sister Bernadette Dufour Lathrop launched it in 1997 from a 10-seat space behind Jack & Jill’s Antique Mall.

Lincoln Square has 10 locations in Indiana—all in the Indianapolis area except for a lone outpost in Columbus, according to its website.

The Irvington location should open sometime in the fall, a post on Lincoln Square’s Facebook page said. While it’s smaller than a typical Lincoln Square space, owners say they’ll use the basement, too, and model the restaurant after its Geist outpost, which is close to the same size.

Owner Sarah Duffy started her cupcake business four years ago, selling her creations at farmers markets and festivals, before stepping up to a food truck last fall. Now she will complement that with the carry-out location that she hopes to open in mid-July.