A vast array of openings and closing in the Indianapolis area:

• Plans are progressing to close the Carmel Cafe Patachou at 126th and Gray Road and move the restaurant to space about 1-1/2 miles away at 5790 E. Main St. near the corner of Hazel Dell Parkway. 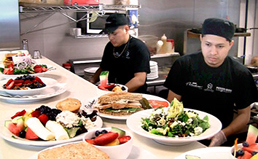 Patachou fans in Carmel will need to shift their sights northeast for brunch. (IBJ file photo)

The 2,800-square-foot space will double the size of the brunch hotspot and add a large outdoor dining area.

• Asian Harbor is expected to open in late August in 2,200 square feet on the ground level of the Axis at Block 400 mixed-use project anchored by a Marsh grocery at Michigan Street and Capitol Avenue.

The sushi bar will be operated by local restaurateur Quig Guo, who owns General Tso’s House and China Inn eateries.

• Good Games plans to open in August at 111 S. Meridian St. south of the Hampton Inn. The Indianapolis store will be the Australian-based company’s first in the United States.

Good Games stocks an array of games and hosts gaming tournaments and events.

• Vineyard Vines is opening July 26 at The Fashion Mall. The Stamford, Connecticut-based retailer was founded in 1998 at Martha's Vineyard, Massachusetts, by brothers Shep and Ian Murray, and has grown to about 60 locations.

• Chipotle officially has committed to Kite Realty Group Trust’s 10,000-square-foot strip center that is replacing the Perkins restaurant building at the high-traffic corner of East 82nd Street and Allisonville Road.

The Denver-based fast-casual Mexican restaurant chain will take 2,160 square feet, according to a construction permit, and could be joined by prospective tenants Smashburger and Pie Five.

• Penn & Palate is closing its location July 30 on the ground floor of the Picadilly building at the northwest corner of East 16th and Pennsylvania streets. Owners John and Kim Robinson, who also operate The Legend Classic Irvington Cafe, opened Penn & Palate in June 2015.

A Facebook posting says: “It is with heavy hearts that we announce the closing of this location on Saturday, July 30th. John and I are grateful for all the patrons we got to know in this past year. We would also like to express our sincere hope that this neighborhood continues to flourish and add to the growing vitality of downtown Indianapolis.”

• Marsh Supermarkets closed its grocery July 15 at the southwest corner of East Washington Street and German Church Road on the city’s far-east side.