The apartment project under construction as part of the River North mixed-use development near The Fashion Mall has been dubbed The Quarry at River North.

Locally based Gene B. Glick Co. will manage the $30 million apartment building, which it is co-developing with PK Partners, along with the entire River North project. Quarry at River North will feature 196 units ranging in size from 462 square feet for the smallest studio to 2,300 square feet for a penthouse.

Rental rates will be comparable to other Class A apartment properties in the Keystone at the Crossing submarket, said Ryan Tolle, Glick’s vice president of asset management. 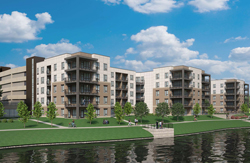 The Quarry name is derived from a former use of the property and its 25-acre lake. The accompanying images show renderings of the project from the northwest (top) and southeast (bottom).

Construction is under way, with the first units expected to be delivered late this year.

Both Glick and PK Partners are tenants in the new office building.

Glick owns 120 apartment properties in 11 states and built roughly 100 of them. The company in the early 1990s stopped building but resumed again in 2010 with Westhaven on the west side of Zionsville.

“We don’t actively build, but in this case [Quarry at River North], we had a great opportunity to work with a great partner to produce a great product,” Tolle said.

CSO Architects is the architect for the River North project.