A Birmingham, Alabama-based company wants to demolish a building at the north end of the Central Canal to construct a four-building student-housing complex on the site with 285 units and 800 beds. 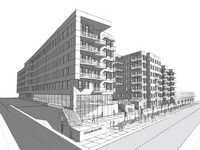 That’s the address of the Indiana University Research & Technology Corp. building. IU put the two-story, 64,000-square-foot structure on the market in September 2015, as it began moving tech operations to the former Wishard Hospital on West 10th Street, which the university is converting into a life sciences hub.

Capstone has the 3.5-acre property under contract and will move forward with its plans (conceptual rendering at right) pending approval from the hearing examiner. Capstone’s request is set to be considered Sept. 15 but could be continued, said Mike Baker, the company’s executive vice president of development.

The developer is seeking to construct four buildings—two at five stories and two at six stories—and a parking garage. Baker declined to provide a cost estimate on the project.

Capstone hopes to begin construction early next year and finish by the fall 2018 school year, adding to the growing number of student-housing projects downtown. Several are either in the works or under construction near IUPUI, as developers race to capitalize on the university’s effort to become more of a residential campus.

“IUPUI has traditionally been a commuter school and has been transitioning to residential the past few years,” Baker said. “We were excited to find this opportunity and are hoping it will move forward.”

Other IUPUI projects in the works:

— West Lafayette-based Trinitas Ventures’ $40 million development is under construction at the northeast corner of Michigan Street and Capitol Avenue. The 11-story development will feature 193 units and up to 7,000 square feet of small-shop space, set to open next August.

— Locally based Annex Student Living LLC plans to build the Annex at 10th along West 10th Street, just west of the White River. Plans for the $32 million, six-story project call for 248 units.

— Louisville-based Investment Property Advisors, the developer of 9 on Canal, plans to build a $37 million second phase that would add 194 apartments and more than 15,000 square feet of retail space along the canal.

— And Athens, Georgia-based Landmark Properties is proposing to build a 12-story, 400-unit tower on a triangular parking lot bounded by Indiana Avenue to the west, West Michigan Street to the north, and North Capitol Avenue to the east.

Capstone Collegiate Communities was founded in 2012 as part of a restructuring of Capstone Development, whose portfolio included 131 projects in 33 states. The new Capstone’s portfolio includes 50 developments totaling $1.3 billion in investment.

Niles Bolton Associates in Atlanta is the architect on the Canal Lofts project.