Apparently no one wants to drink booze at Starbucks.

The Seattle-based coffee chain on Tuesday is ending its “Evenings” program, which offered beer, wine and small-plate noshes in 439 U.S. stores, including as many as nine in the Indianapolis area. 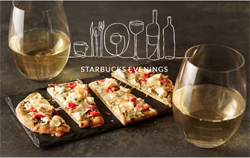 Starbucks’ plan to serve beer and wine was first tested in 2010 near its headquarters and was expanded as a way to drive sales beyond the morning rush and afternoon caffeine addicts. In addition to alcohol, the evening menu featured foods like bacon-wrapped dates and truffle mac ‘n’ cheese.

Starbucks said in 2014 it planned to expand alcohol to thousands of stores. Now, it says it will integrate beer and wine into its higher-end retail format, such as Roastery stores.

IBJ reported in December 2015 that Starbucks had sought alcohol permits for four Indianapolis outposts and five others in collar counties.

The suburban locations were in Carmel, Fishers, Greenwood, Plainfield and Zionsville.