The first units of a $30 million apartment project on the city’s north side should be ready for occupancy in mid-April.

Locally based Gene B. Glick Co. and PK Partners are constructing The Quarry at River North (see image below), a 196-unit project that’s part of the River North mixed-use development just north of The Fashion Mall at Keystone. 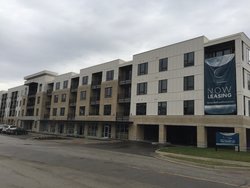 Glick, which will manage the five-story apartment building, expects to have 65 units available for lease by April 15 and the remaining 131 around the first of July.

About 30 units, or 15 percent of the total, are pre-leased, said Chad Greiwe, a Glick executive vice president.

“We’ve seen things pick up pretty well,” he said. “The traffic we’re getting from potential residents is really strong.”

The three penthouses, one of which is already leased, range from $2,200 to $4,900 per month and feature 10-foot-high ceilings, smart automation controls, heated bathroom floors, automated window coverings and wine storage.

The Quarry at River North will be competing with the neighboring Residences at Keystone Crossing; 82 Flats at the Crossing to the east in the Lake Clearwater area; and Ironworks to the west. Occupancy in the northern submarket remains strong, with occupancy running 93.5 percent, according to the latest statistics from the Tikijian Associates apartment brokerage.

“What’s going to set it apart is the resort-style pool adjacent to the lake, and the location itself is a great amenity,” Greiwe said. “You can walk to every restaurant and shop in the Fashion Mall area.”

The Quarry name is derived from a former use of the property and its 25-acre lake.