On the heels of Monday’s announcement from Bank of America that it will take 4,035 square feet in the new Cummins Inc. building downtown, restaurateur Martha Hoover says she’s finalizing a lease to bring Public Greens to another retail spot in the building.

Hoover, the matriarch of the Patachou family of restaurants, says she hopes to sign off on the agreement within the next few weeks and then open in May.

Public Greens is expected to occupy 2,500 square feet in the ground level of the Cummins building at 301 E. Market St. About 3,500 square feet will remain available in the building's dedicated retail space, which totals 10,000 square feet. 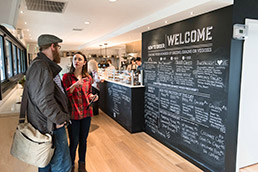 In 2014, Hoover opened her first Public Greens, located in Broad Ripple at 902 E. 64th St. and inhabiting a vacant building resembling a train depot along the Monon Trail. The eatery offers soups, sandwiches and entrees with the same emphasis on fresh ingredients and sense of invention as seen in other Patachou family eateries.

The twist is that its profits benefit a not-for-profit Hoover established to provide after-school meals to children in need. The eatery in the Cummins building will have the same financial arrangement.

Meanwhile, Hoover is making progress on her fried-chicken joint called Crispy Bird, slated near the intersection of 49th and Pennsylvania streets. It's taking space formerly occupied by Barking Dog Cafe, across 49th Street from the flagship Cafe Patachou.

Hoover has resubmitted construction permits after also taking space formerly occupied by Europa Day Spa, for a total of about 2,200 square feet. Crispy Bird should be open in June, Hoover says.

Hoover told IBJ in December that she drew inspiration for Crispy Bird from her Texas roots. Her family lived in Galveston before moving to Indianapolis. She said fried chicken was one of her favorites while growing up.