We’ll kick this roundup off with activity in the Keystone at the Crossing area:

• Le Creuset, a French manufacturer of premium cookware, has filed plans to open a store in the Rivers Edge shopping center. 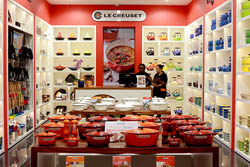 The location will be the first in Indianapolis for Le Creuset, which will take nearly 1,600 square feet formerly occupied by Orange Leaf, according to a construction filing.

Founded in 1925, Le Creuset has just one store in Indiana, at Lighthouse Place Premium Outlets in Michigan City, its website shows.

Le Creuset is most known for its colorfully enameled cast-iron cookware, ranging from bright (cherry) to muted (dune). (The image above is from a recently opened store in South Africa.)

The Fort Myers, Florida-based retailer of women’s apparel moved to its new location as part of an expansion.

The Jacksonville, Florida-based chain is taking the 4,200-square-foot space formerly occupied by Le Peep. Metro Diner also has Indianapolis locations at 3954 E. 82nd St. in Clearwater Crossing, 7225 U.S. 31 on the south side and in the Butler University parking garage.

• Toppers pizza delivery chain has signed a lease to take space at 11640 Brooks School Road in the Sandstone Commons strip center in Fishers, as part of a broader expansion into the Indianapolis area.

The Whitewater, Wisconsin-based company operates local outposts at 910 W. 10th St. near the IUPUI campus and 12545 N. Meridian St. in Hamilton Crossing Center in Carmel. Toppers hopes to have the Fishers location open in the fall.

Toppers is aiming to open five new locations in the Indianapolis area—on top of the two existing outposts—all of which would be company-owned. The chain overall operates 75 stores, 19 of which are company-owned and the rest franchised.

“We are excited to announce that we are starting a brand-new concept on the north side of Indianapolis. Look for more details soon,” a Facebook post says.

In January, a confrontation involving several people outside the nightspot led to the fatal shooting of a 31-year-old man. The lounge previously operated at 429 Massachusetts Ave. before moving to Market Street several years ago.